Scare It! is a 1-8 player game. You score points by having the most matches between the animals left in play at the end of the game, and your secret objectives which you will be dealt during game setup. Each turn, you will use one animal card to “scare” another animal off the table, and possibly move some of the cards in the grid. When one of the columns becomes empty or if there is no legal move possible, the game ends.

Each player has a combination of one animal and one color depicted on their objective cards. The goal is to keep as many animals of the same type and/or color on the table until the end of the game, as you will receive points for each match.

On your turn, you must scare one animal. Following the Scare Rule you must choose one animal card and use it to scare another orthogonally adjacent animal. The scared animal is removed from the grid, creating a hole. The animal used to scare may (but does not have to) take the place of the scared animal. If a hole in the grid has appeared, shift all cards down. 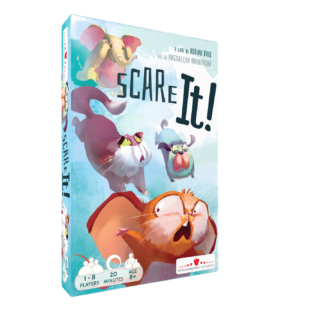