Escape Tales is a series of story-driven escape rooms in card game form, featuring immersive exploration, no time limits when solving puzzles, and a collection of tough choices that will captivate and draw you deeply into a riveting story. Every decision you make will have an impact on how the story evolves and ultimately ends.

Each game is a completely standalone experience. No previous experience with other games in the Escape Tales series is necessary.

The Awakening was the first game in the series, where you follow the story of Sam, whose daughter has been in a coma for over two months and whose doctors still cannot explain how this happened or what caused it. According to them, everything is fine with the girl; she’s healthy and shouldn’t be in this condition. Sam is desperate and looks for answers everywhere he can, which leads to a weird meeting with Mark.

Mark’s son was once in a similar situation, and his father was able to help wake the boy up. He has given Sam a scary-looking book and said that inside this book he will find a ritual called “The Awakening.” But Mark warned Sam that he needs to prepare himself mentally since this ritual will transfer him into another dimension, where he should be able to find his daughter and understand what is the cause of this state. If Sam’s lucky enough, then he will be able to wake her up as well. Sam has held onto the book for more than a week. Finally, he’s ready to go into the basement and perform a ritual. Are you ready, too?

Low Memory, the second title in the Escape Tales series, takes place in a cyberpunk future. It is the year 2060. Elizabeth is saying goodbye to her husband. They are going on a family trip, but Elizabeth must first finish a research project, so she promises to catch up with him later. A moment later, she watches her husband’s autonomous vehicle leaving the driveway, her thoughts already drawn towards her work. Another normal day — at least that is what Elizabeth believes.

The following morning, Elizabeth wakes up on her sofa. She is having a terrible headache and her home is trashed — turned upside down as if there had been a break-in. Although she keeps trying, she is unable to recall anything after the moment she left work the evening before. Elizabeth decides to use the memory scanner. It is the perfect tool for the situation! However, every technological advancement comes at a price …

The newest title in the series, Children of Wyrmwoods features the dark and twisting story of a young man whose fate is beset by both the most mysterious of powers and by the tyranny of evil men. Prepare for a gripping story filled with plot twists and numerous surprises, astonishing exploration, and riveting puzzles. Faced with deeply personal choices which will influence the tale, take a step into a grim fantasy world where little is what it seems at first. 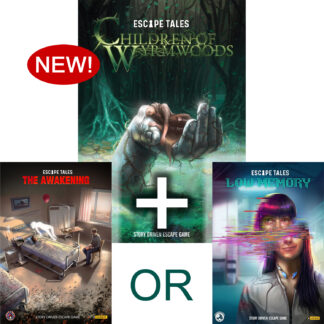