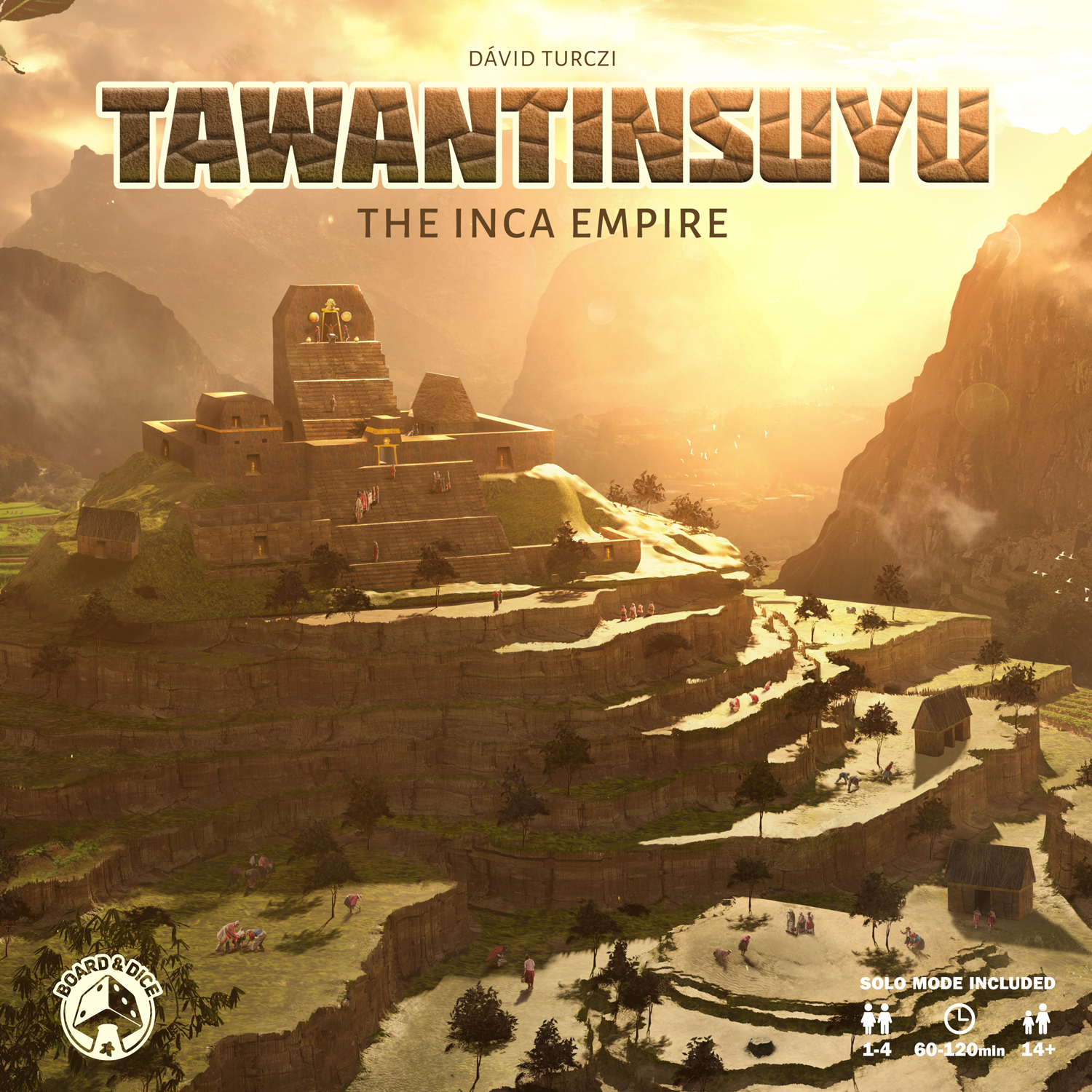 The great Sapa Inca Pachacuti turned to his offspring and ordered them to worship Inti, the Sun God, and to expand the Inca Empire as far as the llamas roam. With Chinchaysuyu, Antisuyu, Qullasuyu, and Kuntisuyu — the four regions of the new empire — now ripe for conquest, the time has come for Pachacuti’s true successor to arise.

Gather your people from the villages below and use their unique abilities to strategically place them where they can perform the greatest tasks for you. Climb the steps of the Sun Temple, reaping the rewards of your piety. Build structures that both nourish your people and provide you with benefits no other has at their disposal. Muster an army and conquer villages in the four realms of Tawantinsuyu. Prove yourself a worthy successor to Pachacuti and lead the Inca to glory!

The game board features a hill located within the old Inca capital of Cusco, the sides of which are terraced and divided into five sections. Atop the hill sits the Coricancha, The Golden Temple, the most important temple of the Inca Empire. Within the Coricancha, each player has a High Priest. On the terraced sections below exist a variety of worker placement locations, interconnected by paths and individually marked by symbols. On your turn, you must either place a worker onto a location outside the Coricancha OR choose two of the following:

When placing a worker, you must first discard a god card with a matching symbol or pay one gold. Once placed, the worker remains on the game board for the rest of the game! Each worker placement location is connected to exactly three action spaces. You must always perform at least one of these actions. However, for each adjacent worker (i.e., connected to your worker’s location via direct path through one of the action spaces) that matches the type of worker just placed, you receive one additional action!

While some locations will result in you being able to perform multiple actions, other actions and placements may be more desirable, especially since each of the five types of workers has a unique ability:

All god cards feature one of the different symbols found on the worker placement locations. Before placing a worker, you must either discard a god card with a matching symbol or pay valuable gold resources. God cards also depict special abilities that can be activated only if you have previously built a matching statue!

Army cards allow you to send one or more units to conquer villages in nearby regions. You must compete against the other players for control of each region as well as for valuable rewards that can be gained as a result of military conquest.

The position of your High Priest within the Coricancha has a significant impact on your overall strategy, affecting your access to powerful actions and determining any potential resource costs when placing your workers. More specifically, when placing a worker, you must pay additional resources the farther your worker is from your High Priest, from nothing all the way up to eight potatoes or corn!

Additionally, when moving your High Priest, you can activate powerful actions available only within the Coricancha:

The game ends when the worker pool has become exhausted, symbolizing the full incorporation of nearby regions and villages into the newly risen Inca Empire. You then score bonus victory points from reaching the top of the temple, from your woven tapestries, and from various buildings and resources you have accumulated.